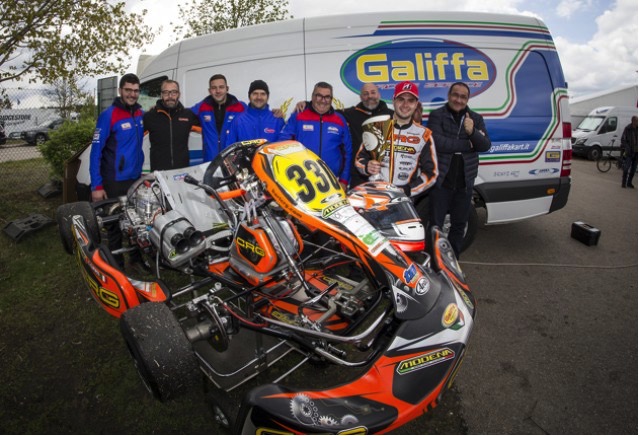 Simone Cunati conquers the 2nd place in Wackersdorf with the CRG Modena Kart team and becomes a candidate for the KZ2 European Championship title. In KZ Hiltbrand is 11th for a penalty and De Conto 13th.

The first round of the FIA Karting European Championship for the shifter classes KZ and KZ2 in Wackersdorf, Germany, saw the CRG colours on the podium with Simone Cunati, with the Modena Kart team, fantastic protagonist of the KZ2 category where he achieved an excellent second place.

The weekend in Germany was quite troubled for an unexpected rain and cold weather in spring, and the CRG Racing Team drivers faced several problems precisely for the bad weather on a number of occasions, especially on Saturday during the qualifying heats under a heavy rain.

The overall balance for the CRG colours was nonetheless positive. In KZ the 2 times World Champion Paolo De Conto (CRG-TM) couldn’t perform at his usual level during qualifying practice and heats because of some technical problems, but during the Final he was making an excellent race before a contact between Stan Pex and his teammate Hiltbrand make him lose several positions.

A better weekend for Pedro Hiltbrand, racing with Iame engines, that showed a great speed during all the phases of the race, even if a penalty for a contact in the Final threw him out of the top ten. 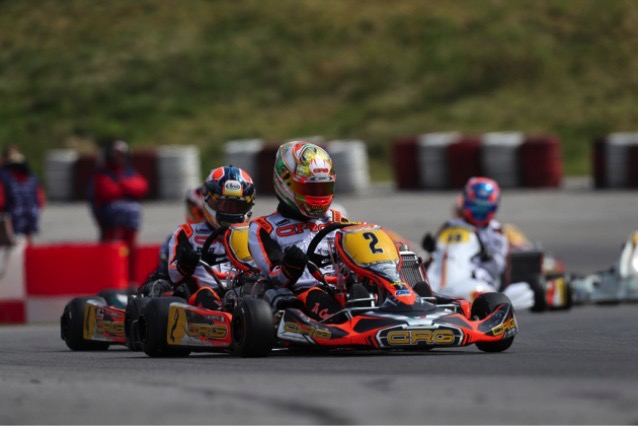 In KZ2 the second place achieved by Simone Cunati with Modena Kart was incredible, very fast since the qualifying practice with the best time in Series 2 and then 4th overall after the heats. In the Final, Cunati was still very competitive fighting for the victory until the finishing line, where he was at only 62 thousandths from the winner Skaras. In the championship standing, Cunati is in second place with 27 points, at only 7 points from Skaras.

Among the CRG drivers, Benjamin Tornqvist of CRG Holland was particularly unlucky, 6th in the overall after the heats but forced to retire in the formation lap of the Final for a technical problem. It should be pointed out the performance of the Spanish driver Gerard Cebrian, who ended with a positive 12th place, so as Max Tubben (CRG Holland) 15th. Andrea Dalè made an excellent recovery from the bottom of the grid until finishing 16th, ahead of Jean Luyet that also made a nice recovery. Filippo Berto in the end was 24th for a penalty. Francisco Javier Sagrera, Kas Haverkort (CRG Keijzer Racing) and Marco Valenti couldn’t qualify for the final for a handful of points. 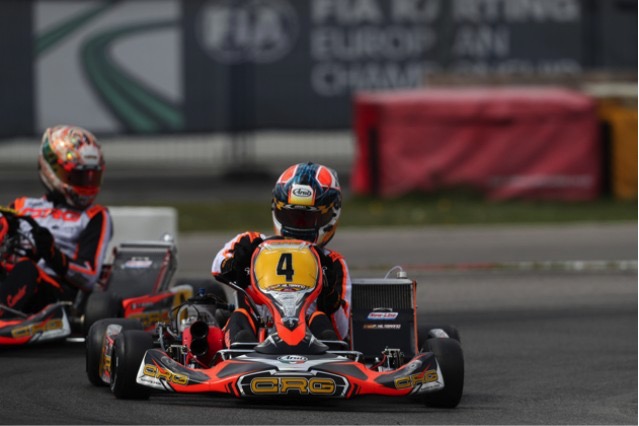 Pedro Hiltbrand (KZ): “The contact I received a penalty for was a race episode: it’s unthinkable that such an action that penalized my teammate was intentional. Unfortunately, it is difficult to find stewards with instruments and experience to analyse what really happens on track and why. For what concerns our technical balance, instead, we are very satisfied as we had an excellent pace and great speed. Our Road Rebel chassis confirmed to be the top and also our Iame engine proved to have a high potential, if we consider that we are in the first development phases.”

Paolo De Conto (KZ): “We had some problems to find the performance during this weekend. But we collected a lot of data and we have all the instruments to analyse and try to understand quickly what didn’t allow us to be fast. Moreover, the changeable weather didn’t help, but we have clear in our minds what didn’t work and we’ll be back more competitive in Sarno, even if it will be difficult to fight for the title, after the race contact that didn’t let me finish in top ten.”

Simone Cunati (KZ2): “It’s been a perfect weekend: excellent team work (Modena Kart), the performance of our Road Rebel chassis and the TM engines by Galiffa. Now we go to Sarno with the 2nd place in the championship and all the potential to fight for the title.”

Next meeting with the KZ and KZ2 Eueopean Championship in Sarno on June 16th.