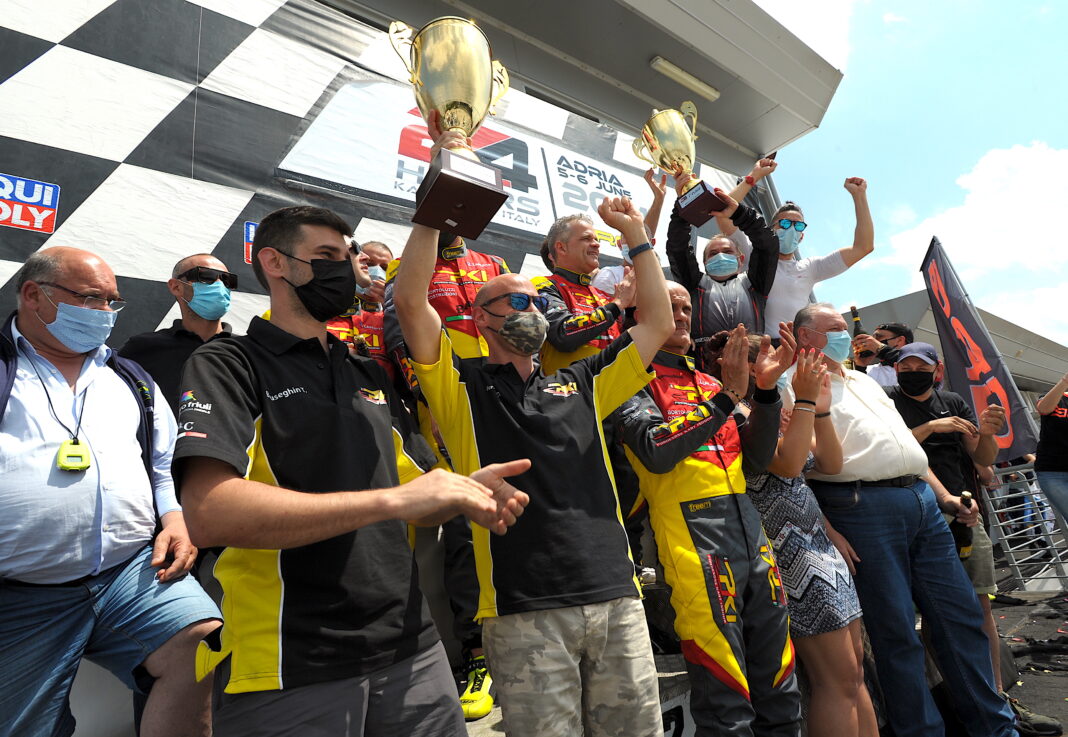 It has been a fantastic edition of the 24 Hours Karting of Italy, the one which took place on the Adria Raceway track from June 4th to 6th. The 4th appointment overall of this event organized and promoted by CRG with its CRG Centurion karts, has once again proved to be a key competitive meeting for international endurance karting.

40 teams from 12 different countries challenged each other on the track and after 24 exciting and eventful hours, also thanks to a bit of rain that fell during the night, the victory went to the Italian GFT Racing team led by Gabriele Meda with Giorgio Ganciu, Michele Suardi, Daniele Cervaro, Mattia Castelletti, Stefano Pallavicini and Orlando Sidoti behind the wheel, while in the SILVER ranking it was the Chioggia Kart team of Nicola Santi, Mauro Varotto, Demetrio Polauszach, Nicola Fortin, Mattia Massarotto and Michael Nalesso who won. The Italian GFT crew, made up of drivers who boast a very high profile resume in endurance races, covered 1263 laps ahead of the BAC-PKI squad, led by Denis Furlan and Thomas Bruseghin, who put Fabiano Bottosso, Marco Bortoluzzi, Andrea Rocco, Andrea Riva, Carlo Capello and Claudio Ferraresso on the track and who were the winners of the last edition, but also the authors of the pole position in the Super Pole on Saturday morning.

In 3rd place, Lorenzo Beretta’s DMS Motorsport team, made of Stefano Perseghin, Francesco Russo, Davide Trombetta, Mario Villa and Claudio Biffi, which also finished just 26 ”from BAC-PKI, while the Belgian team Racing 4 Belgium Black got P4 in the end. The crew composed by Simon Delvenne, Guillaume Germis, Maverick Dessy and Maxime Drion has long been fighting for the podium and made it to the finish line in front of Zena SMO, the first of the 5 teams lined up by the Ligurian squad, made up of Wesley Bettinelli, Lorenzo Vailati, Matteo Roncaglio, Andrea Bigioggera and Davide Balbo. The French NTKart Pro team of Ugo Nastasi, Freddy Bruni, Arnaud Hemricourt and Dimitri Duszynski finished the race in 6th position: they drove the race for a long time in the first 10 hours, before an engine failure stopped them on the track in the first night hours. Their comeback after the engine change was incredible, but it didn’t allow them to get back into the fight for the podium. Behind the French team, Team Nutria (Gilberto, Mazzarolo, Giordano, Prati, Pero and Carraro), a historic endurance karting team, who achieved an excellent placement in the top ten, like Chioggia Kart, which finished in 8th absolute position, ahead of Zena Warriors in 9th place and the Pomposa Dream Team in 10th position.

For what concerns the SILVER ranking, the victory went to Chioggia Kart as mentioned before. From the very first stages, the team has fought with Scuola Karting Abruzzo Academy and Zena ODR Panther. In the last part of the race Chioggia Kart slightly stretched on Zena ODR Panther, who obtained 2nd place, while Scuola Karting Abruzzo Academy, which had suffered some technical problems in the first part of the night, slipping up to 4th place in its category, made it to the 3rd step of the podium, making good use of the race phase with the rain and the last hours, when they controlled the MGS team. In 5th place the Tutela Legale team closed with an exceptional comeback, slowed down in the first hours of the race by a double stop due to a problem with the accelerator leverage, but then able to climb up more than 15 positions, with a race pace equivalent to the top teams. Afterwards, again in the SILVER ranking, the RKS Exp team got 6th place, the Gas Master one finished 7th and the top ten was completed by Bolza Corse, RKS and Riders.

The event was broadcast in live streaming with 4 different video connection from the track and was covered with many communication activities by the CRG press office. The organizational balance was very positive, also thanks to the excellent services that the Adria circuit can offer for this type of event: from the hotel rooms above the pit lane for the teams, the comfort of the pits, the over 20 cameras available to the Race Direction to monitor the action on the track and the exceptional lighting system for the night.

We will just point out for the record that it was never necessary to deploy the Safety Car (the powerful BMW M235i xDrive Gran Coupé supplied by Auto Vergiate), not even during the almost two hours of rain that fell during the night, as the race direction wanted to leave the teams the opportunity to compete on the track, as safety conditions were not missing.