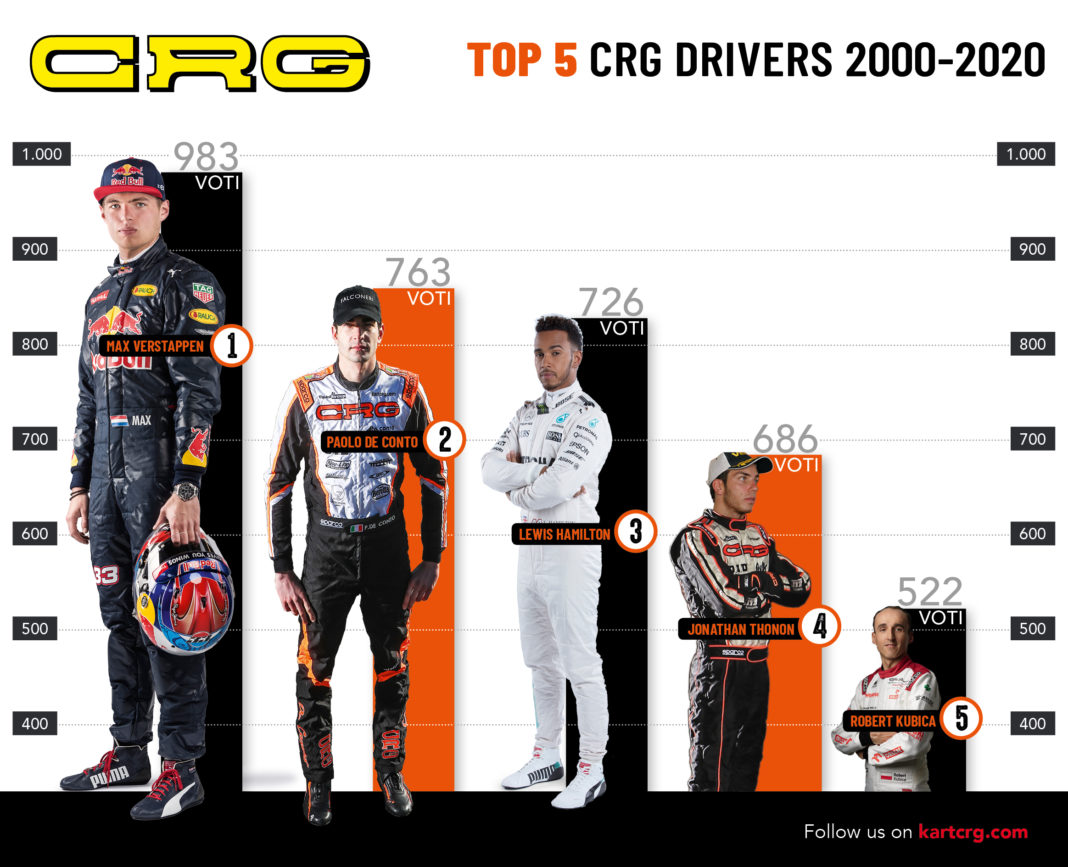 The Contest on CRG social channels (Facebook and Instagram) to elect the best CRG driver from 2000 to today (the last 20 years) has been very successful. The nominations to define the 10 candidate pilots were made by the CRG management, based on some criteria which, necessarily, excluded some names equally noble and beloved by the public. In the first place, only the period from 2000 to 2020 was considered and for this reason some flags of the CRG brand such as Danilo Rossi were not present. Secondly, only drivers no longer active in karting and those known by the general public for having access to professional motor racing were chosen. Finally, we took into account the number of FIA titles won in karting. This is how we reached the 10 nominations headed by Max Verstappen, World Champion of the KZ class with CRG in 2013, the season in which he also graduated European KF Champion. Arrived in Formula 1 from the nursery of the karting branded CRG also 6 other drivers: Lewis Hamilton, 2001 FIA World Cup winner, Robert Kubica, who started in 1988 with CRG and won an Open Championship in the 100 Junior, Vitantonio Liuzzi (World Champion with CRG in 2001), Niko Hülkenberg, Nico Rosberg and Sébastien Buemi. The 4-time KZ World Champion Jonathan Thonon, the 2-time World Champion Paolo De Conto and Felice Tiene, winner of the KF2 World Cup in 2012, were included to represent the drivers who have become Karting icons. Obiously, many other CRG Karting drivers who have been protagonists of the past 20 years would deserve a mention, from Giedo Van Der Garde and Wade Cunningham, respectively Formula A World Champions in 2002 and 2003, up to the Italians Giorgio Pantano, Davide Forè and Alessandro Manetti and it was certainly a difficult selection.

Back to the Contest, the joining of the fans was a success beyond expectations and it took a few days to analyze all the votes and messages received. In the end, however, the verdict was unequivocal: Max Verstappen is considered the strongest and most loved driver. The Dutchman scored 983 points and prevailed both in the votes obtained by Facebook and on Instagram. It should be remembered that Verstappen was recently elected by the sector press as the strongest Kart driver of the last 10 years and this further recognition underlines once again how strong and complete he is considered. Behind him, Paolo De Conto ranked with 764 points, a true recent icon of karting, a driver who has given the CRG brand dozens of international successes and who has only retired from racing earlier this season. Lewis Hamilton climbed the 3rd step of the podium, perhaps the most popular F1 driver that CRG has launched at the top of Motorsport. In the top 5 also Jonathan Thonon, 4th with 686 points and still firmly in the memory of Karting enthusiasts, while in 5th place was Robert Kubica (522 points), for which his fan club also moved en masse in the voting by sharing the Contest on their social pages.

For all the other 5 drivers in the running, a ranking has not been drawn up, but surely Felice Tiene, who works in karting as a coach driver with many young people, as well as Tonio Liuzzi and Nico Rosberg, with the latter in particular, highly rated on Instagram.