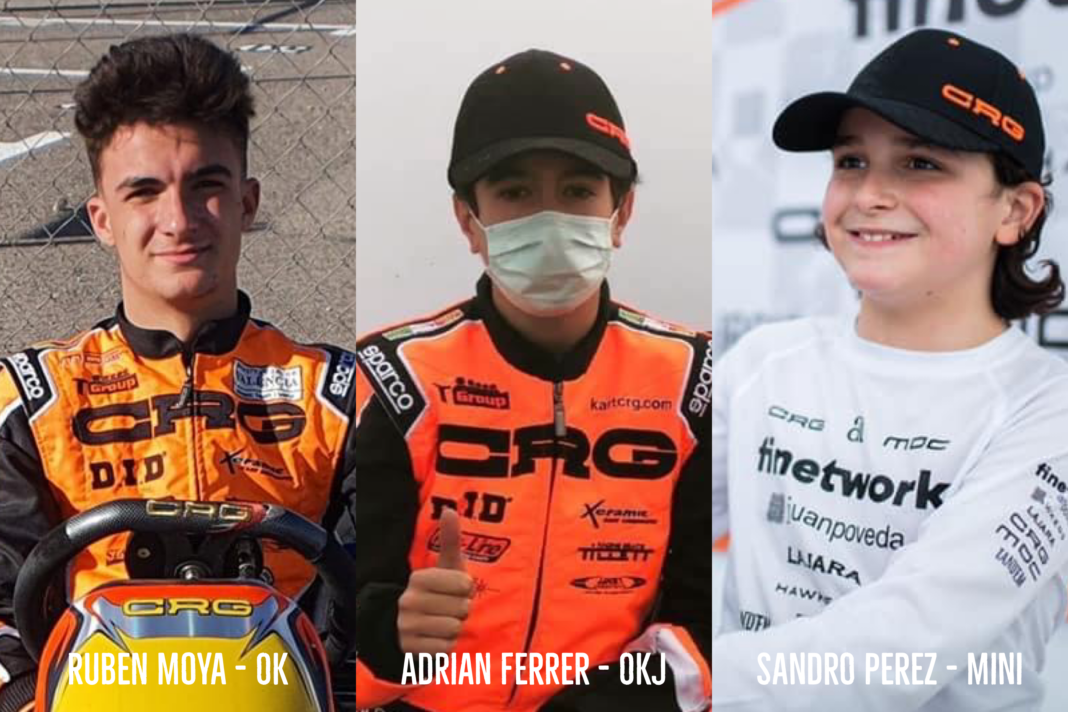 With the 2021 season about to start, the CRG Racing Team has made official the last pieces to complete the team’s new driver line-up, announcing three spanish drivers: Sandro Perez for the Mini category, Adrian Ferrer for the OK Junior and Ruben Moya for the OK.

The signed collaboration agreements are the result of the close synergy that CRG has activated for some seasons with Oriol Dalmau’s spanish partner MDC team. This collaboration has made possible to diversify the programs of all three drivers between the Spanish Championship, where they will all race with the MDC colors and the international commitments with the official CRG team. All 3 of the them are drivers with great potential, who will make a great contribution from a sporting point of view to the CRG colors, both in the spanish market and internationally.

Sandro Perez is the youngest and he was born in 2009; he will be racing in 60 Mini with the official CRG team and his debut race will be the WSK Master in Adria on the 28th of february. His season will go on with a program of around 8 appointments, including the WSK events and the Italian Championship, while with the MDC team he will attend the X-30 Mini in the Spanish Championship and in some national events.

Adrian Ferrer, on the other hand, already made his debut with the CRG Racing Team last year in the 60 Mini and this winter he moved to OK Junior. His sports program will include the 4 rounds of the European Championship, the World Championship and some training competitions such as the Champions of the Future Series. The Spanish Championship in the X-30 Junior class will also be added to his international program.

CRG’s commitment with Ruben Moya will be exactly the same program. After an excellent performance in the 2020 World Championship in Portugal, where he finished in the top ten, he has been confirmed by the official team for the OK category.

Sandro Perez: “Becoming a so young official CRG driver makes me proud. I am grateful to the team and to Oriol, who suggested me this sporting path, which is the same one that many drivers who have become champions, such as Rosberg and Verstappen, went through. Winter tests in Spain went very well, I have immediately found a good feeeling with the chassis and the technical material in general. Now I can’t wait to start working with the official team too”.

Adrian Ferrer: “This year will represent my debut in the OK Junior and having already raced in Mini with CRG, will make this transition more fluent. It will be a strong season and I want to learn as much as possible from the technical staff, in order to improve myself in the shortest possible time. My priority goal will be the European Championship and I am very happy that the first round will take place in Spain”.

Ruben Moya: “Last year’s experience in the OK World Championship has been really positive, both from a technical point of view, but also for what concerns the human aspect. Last season we have also built a very good relationship with Oriol Dalmau and this helps to lay the fondation for the 2021 program. I will race with MDC in Spain in the Senior category and with the official CRG team for the international races. I will do my best to pay back that trust that CRG gave to me with good results on the track”.