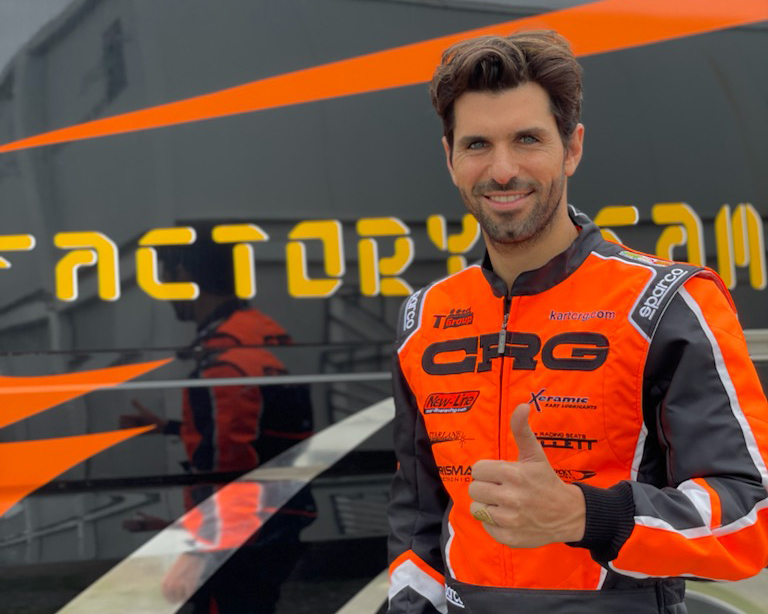 CRG is pleased to announce the collaboration agreement with former F1 driver Jaime Alguersuari, who will be competing with the official Racing Team of the Italian Factory in the FIA ​​European Championship and in the FIA ​​World Championship of the KZ class.

After the rumors of the past months, as well as some testing sessions together with the Spanish team of CRG (MDC Racing) and with the official one in Italy, the return to racing for the Spanish driver who, after his arrival in F1 and his experience in Formula E, had retired from motorsport when he was just 25 years old, is now a reality. Despite his brilliant new career in the music field, where he is now well-known under the stage name of DJ Squire, the racing adrenaline has probably been missing a lot in recent years. Perhaps for this reason he decided to get back closer to karting, where passion and emotions are direct, pure, essential. After the first test with the kart something inside him suddenly rekindled and with the musical events stopped due to the effects of the pandemic, he was able to get back behind the wheel for some training sessions, realizing how much the track was missing and what it could probably still offer him. When he found out he was still fast, all the pieces of the puzzle begun to come together in a few weeks: from the first test to the agreement with CRG, one of the most successful factories in the history of karting, everything happened in less than three weeks. This is not a marketing action, despite Jaime having a strong following in Spain and especially among young people. These aspects are marginal for both parties in this collaboration: while CRG gave him confidence because the tests completed were very positive and because his determination is high, Jaime accepted the challenge of racing with a top team in the most important events of the karting, because he immediately became aware of being competitive.

The program that CRG and Alguersuari have decided for the 2021 season includes the participation with the Official CRG Team in the European Championship and the KZ World Championship, where he will work alongside the CRG drivers Jeremy Iglesias, Alex Irlando and Paolo Ippolito. On the sidelines of this international commitment, Jaime will also be competing in the Spanish Championship (CEK)  with the support of the CRG MDC Racing Team and Karting El Vendrell of Carlos Gil, CRG importer for Spain. This program was thought to better prepare his return to top competitions.

Here’s how Jaime commented on the agreement with CRG: “After a 5-year break from racing, I rediscovered the pleasure of driving on the track and the adrenaline of competitions, aspects that karting represents in an exceptional way. Driving a kart is fun, challenging and fascinating. The challenge I have before me is exciting and being able to share it with a prestigious partner like CRG gives me a lot of confidence. I have a very competitive streak and if I start this new project it is because I am determined to obtain important results”.

Marco Angeletti, CRG Marketing Manager, also commented positively on the agreement with the Spanish driver: “The first time we spoke with Jaime we did it through Sete Gibernau, who uses our KZ karts on his private track in Barcelona. He told me that Alguersuari was training there and that he would have liked to do a test with our Official Team. We organized it in a short time, but we didn’t think we would find a driver so determined to return to racing straight away and above all immediately so competitive. After the test in Lonato, everything was very quick and natural because Jaime is perhaps more motivated and determined today than when he was racing in F1, so discussing sports programs and how to deal with them was very simple. The fact that he is a well-known character and that with his work in the music field he is also very popular among young people is an added value of this collaboration, but certainly not a determining factor behind our agreement. With him our KZ team has been further strengthened once the season has begun and we are all determined to ensure that this collaboration brings excellent results in a short time”.

Driver profile: Jaime Alguersuari was born in Barcelona on March 23rd, 1990. His passion for engines has been handed down from father to son: Jaime Alguersuari Senior was a professional motorcycling rider, editor and mentor of the World Series success. In the early 2000s Jaime raced internationally in karting and in 2006 he joined the Red Bull Junior Team.

In the motorsport world he raced in the Eurocup Formula Renault in 2006 and 2007 (with a second-place finish in the 2007 Championship) and in the following season he won the English F3 Championship. In 2009 he began the season racing in the Formula Renault 3.5 Series  and in the middle of the year he was called up for Scuderia Toro Rosso in Formula 1, where he made his debut in the Hungarian GP replacing Sébastien Bourdais. In September of the same year he took part in the CIK-FIA KZ1 Karting World Cup in Sarno, finishing in the top ten. His experience in F1 also continued in 2010 and 2011 always with Toro Rosso, where he has obtained the best results twice in 7th place (Italian GP and Korean GP) and 6th place in qualifying in the Belgium Grand Prix.

After the experience in Formula 1, from the 2014-2015 season he has raced in the newborn Formula E championship with the Virgin Racing Team. The Spaniard ended the season in 13th place, but missed the last two races and at the end of the season, at the age of 25, he announced his retirement from racing.

At the same time he began working in the music field as a DJ and producer under the stage name of DJ Squire, gaining many professional successes.